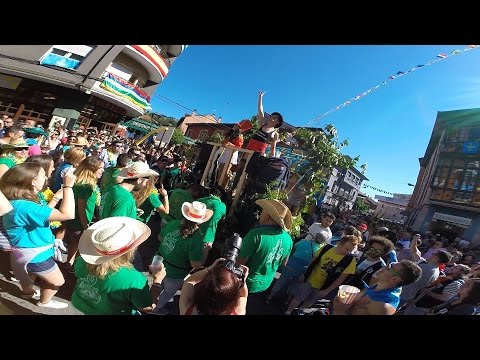 Very few sports events are o famous as this one. The International descend of Sella is a unique experience in which we put on trial, it does not matter if you are a professional, an amateur, a sportsman or a member of the public. It is a folk-sport festivity, declared of deep International Tourist Interest, it is also the most important one along the Asturian summer. It is so popular because each year it is more crowded and the party found here is not seen anywhere else. 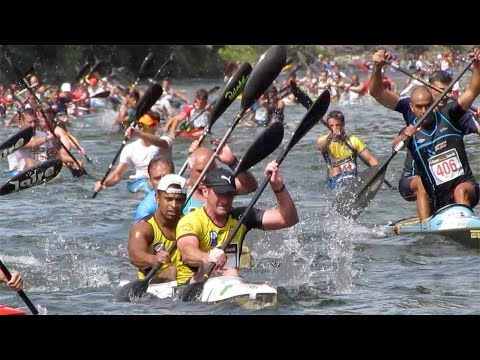 The story started by the year 1929 when Dionisio of La Huerta and a friend of him made an excursion in canoe by the river Piloña, a tributary of the river Sella. In the summer of 1930, they were accompanied by another partner and they descended the river from Arriondas to Ribadesella. Their aim was only descending for pleasure and enjoyment. This excursion began to take place yearly and then it began a kind of competition among the friends in order to get the best records. Dionisio was not interested in competition but taking pleasure of the river itself and thanks to his attitude, this does not end in a simple race.

More than 50 years later of the origin of this competition and after this trial was set up at all levels, an Asturian couple J. Jacobi-Ramón Andersson, in 1988, made a record very difficult to do better even today: one hour and six minutes and thirty-six seconds in finishing 17 kilometres which are between the localities of Arriondas and Ribadesella. This is the longest course of this beautiful river which its natural course has sixty kilometres surrounded by splendorous nature.

The river Sella is a kind of divinity to pay homage to and it is the main protagonist of this celebration. It is born in Majada of Pozúa in the valley of Sajambre, in the Peaks of Europe and covers the councils of Cangas of Onís, Arriondas and Ribadesella, where it finally flows into.

The festivity starts in the early hours in the morning, when fluvial trains go towards Arriondas from Ribadesella and Oviedo. At eleven in the morning the streets of this locality began to be crowded by the new people coming. These people take a lot of equipments for doing this descend or they take their car in order, to follow the race from the road parallel to the river.

Before midday, canoeists wait impatiently. After the ritual words «Keep public in silence and listen to these words…» These are Dionisio’s words before the race starts, and they are being repeated yearly even after his death in 1995. At twelve of o’clock this race starts.

At this point, more than one thousand canoes get into the river. Because of the hurry for the first places, many canoeists get broken their canoes or paddles. Unfortunately, some of them get trapped and others put on the head of the crowd at the time they hear the gunshot. In the half way, the course of this river is narrower and only allows five, six or seven canoes to pass together this section. Many of the participants are left behind and the favourite ones have to row hardly in order to be the first. When a participant is really good at rowing, there is no much to do. Numerous prizes of this competition have been decided in the last metres of the course of this river, just down the bridge of Ribadesella, where it is the finish.

The year 2004 was very significant for this competition. The canoe K2 whose owner is Julio Martínez (Seven times champion in this competition) and Emilio Merchán, his friend, defeated their adversaries and also opened a new possibility for completing this race because they reached the finish passing by a new section of the river called «the Island of la Boticaria».

In Ribadesella, the finish of this race, people wait impatiently for the champions. The megaphone tell us about what is the nationality of the potential winner, if he is Portuguese, German or Asturian (people living in this region of Spain).

When everything is finished, we keep alive the tradition inaugurated by Dionisio and all the participants go up to the Campos of Ova only 3 kilometres from Ribadesella, where a wonderful picnic is prepared for them. After having lunch, they can also have a siesta under the trees enjoying the regional folk and dances and then they are awarded the prizes.

But the party never ends, because this locality by the river Sella, offers a lot of entertainment on fridays and saturdays nights in Ribadesella and also in Arriondas. Each year this festivity is even more crowded beating all possible records of previous years.

There is another speciality. This is to do this same race but at night. More than 100.000 canoeists try it yearly.

Both villages, Arriondas and Ribadesella are full of life during those days. This place is a kind of little Venice full of channels. The nocturne sportsmen are accustomed to having a soft drink in the urban centre before the race starts. They are always accompanied by a large number of fans and also for young people who go out on binge.

As the night goes by, a number of «disc-jockeys» give life to the night with their music. Under the words «Row, Row!» people encourage those night participants up to the dawn. In this race vitality and hard efforts are very important. This race also counts with very experienced people, both men and women.

Someone said that this social event commonly known as «Sellismo» is a kind of special day event that only can be found in this region. It is a spiral of deep emotions, where people meet and start new social relationships under any kind of conventionalism.

If you have the chance, come here to enjoy it. 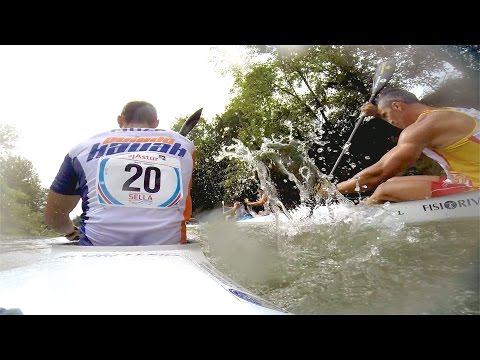